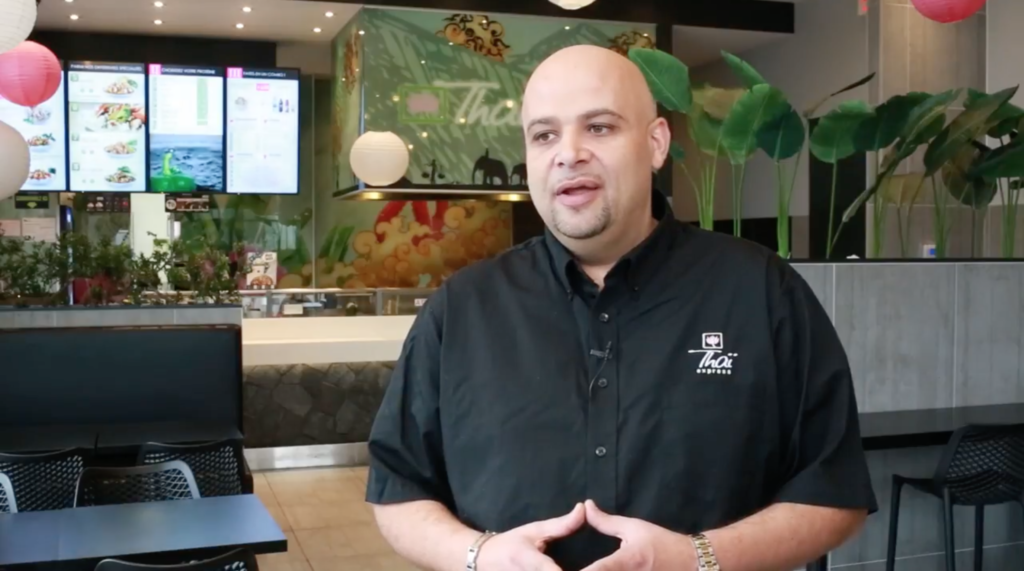 Eddy Hassan remembers the first time he experienced Thai Express. He stepped up to the counter and ordered Chicken Pad Thai, and then he watched as a skilled cook prepared his dish. That’s all it took to convince him that his future was in Thai food, not sandwiches.

At the time, Eddy owned several franchise sandwich shops in the Montreal and Laval areas of Quebec. He had been looking for a new restaurant concept for a while to grow his business, and when he found Thai Express franchise, he knew it was a hit.

“I was really impressed,” Eddy says. “At first, when I saw the pictures, it looked like it was just noodles and a choose-your-protein place. When I ate it, I was impressed by everything — the look, the taste, the presentation, the price.”

Thai Express franchise checked off all the boxes for this serial franchisee — it was affordable to own, provided a quality product consumers enjoyed, and was unlike anything else in the market. Not long after that visit, Eddy opened his first of four units in the Montreal area. Earlier this year, he opened his fifth — the first U.S. Thai Express location in the Mall of America, Minneapolis. When Eddy heard Thai Express was coming to the states, he leapt at the chance to be a part of it.

“I opened my own Thai Express in the U.S. because this is a system that works,” Eddy says. “Thai Express has no real competition, offers food that people love, and is a business that makes money. It attracts the clientele, and once they come in and eat, they do it again and again.”

Founded in 2004, Thai Express took Canada by storm, growing to more than 285 locations in the past decade. Tapping into the demand for an authentic, fast and affordable Thai experience, the brand exploded in popularity in Canada to become one of the most recognizable restaurants in Canada. Bolstered by the support and leadership of franchise giants MTY Group™ and Kahala Brands™, Thai Express has entered the United States market — where the demand for Thai food has been rising for years. Eddy thinks the future is bright for the U.S. market based largely on one factor: the food is exotic, yet approachable.

“It’s exotic food that people really like in North America, in general,” Eddy says. The ingredients aren’t going to scare people who don’t like ethnic cuisine — chicken, pork, beef, noodles. But the flavors and spices are special and surprising. When paired with Thai Express’s food-theater preparation and presentation, customers respond. “It’s very attractive food with a nice presentation, and it tastes good.”

Thai ExpressTM franchise cuisine doesn’t compete in the overcrowded and overserved burgers-pizza-chicken arena. Instead, this is a business that fills a huge, untapped demand in the marketplace — Asian cuisine.

“People are fed up with the same old, same old in restaurants,” Eddy says. “When you go into a franchise, it’s always the same whether you go into this one on this street or that one on that street. When you come in to Thai Express, there’s a uniqueness. It’s similar, but very different from what they’re accustomed to.”

For multi-unit owners like Eddy, Thai Express makes sense because it’s affordable to own — startup costs begin at just over $330,000, quite affordable in the QSR and fast-casual markets — and easy to staff. Eddy’s restaurants require just 15 people on the payroll. Also, Eddy points out, the training that new franchise owners and their staff receive means they don’t have to hire specialty chefs to make the food.

“You just follow their simple ingredients, their steps to prepare the food,” Eddy says. “You can hire anybody, and, as long as you teach them, give them the right training and the right follow-up, they do well. If I can do it, anyone can.”

Follow in Eddy’s footsteps and be the first to market with Thai Express in your community. Experience firsthand the value of the Thai Express customer relationship. Our brand’s loyal clientele, a tested product, brand and a proven system are all parts of what makes Thai Express a great opportunity.

Investment costs range from $330,400 to $731,700, depending on the model you choose and location costs help make Thai Express an affordable entry into a potentially large growth market. Learn more about owning a Thai Express today at our franchise information website, or download our free Franchise Information Report.

©2017 MTY Franchising USA, Inc. All rights reserved. All other trademarks referenced are property of their respective owners. The information provided herein is for informational purposes only and is not intended as an offer to sell, or the solicitation of an offer to buy, a franchise; nor is it directed to the residents of any particular jurisdiction within the U.S. or elsewhere. The following states currently regulate the offer and sale of franchises: CA, HI, IL, IN, MD, MI, MN, NY, ND, RI, SD, VA, WA, and WI. If you are a resident of one of these states, or of a jurisdiction that has similar requirements, we will not offer you a franchise until we have completed the applicable registration or obtained the exemption from registration, and completed the applicable disclosure requirements. Regardless of what state you reside in, an offering can only be made by a franchise disclosure document.